So, Reddy Lane Market Garden is having its best season ever. The dry Spring meant we could crack on with planting, and the coolish Summer with intermittent rain, has provided us with a field full of crops. It is the first year when we have used all of our 1/2 acre. And already this year we have grown and sold locally 650kgs of organic veg. 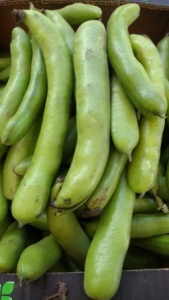 The only crops that have finished for the year is the broad beans and the shallots. We harvested and sold 80kg of broad beans, up from 55kg last year. Shallots were a new crops for us, but I am happy with selling 138 bunches, from 2.5kg sets. We have lifted all the garlic, and have sold 21kgs so far, but there is lots left.

If you were wondering how yields relate to income, kale is the winner so far, with twice as much income as the second best crop. In second place its broad beans, and third is garlic, though there’s plenty more to be sold.

The French beans, maincrop onions, runner beans and carrots are nearly ready for harvest. The leeks are some way off yet.

The only outside sowings left to do are the Rainbow Chard and the brassica salads, but it has been too wet for the last few weeks to get the rotavator on the soil. It’s not too late in the season though. The Winter salads go in the polytunnel when the tomatoes and cucumbers have finished.

So, it’s mid June and alot has happened in the garden. I’m going to try and review each section and crop and where Reddy Lane is at. There have been some successes and some failures…..

The herb garden was covered with plastic last Winter, and I’ve put put about 30 kale plants out, and lost about 20 to slugs in the last fortnight’s rain. I’ve sowed about another 600, for this and the brassica bed. I’ve chosen Westland Winter and Cavelo Nero this year, first time with both of these, and optimistic the second and third sowing will be ok.

The 5kg of Therador garlic bulbs I bought has done excellently over Winter. And I harvested the first bulbs to sell ‘wet’ at Leve Market and in the veg boxes last weekend. There were loads of slugs under the plastic when I lifted one sheet, so I was able to kill about 100 in 1/2 an hour. A bit gross but the carrots next to it were being demolished.

The broad beans planted early next to the garlic will be ready to harvest next weekend. So, actually planting relatively late compared to some growers has only resulted in a crop about 2 weeks later. I have re – sowed and re – sowed in this bed to get it full of plants. And that was even despite it being covered with plastic for a year, and weed free when sowed. The second broad bean bed has taken I think four sowings to fill. And I’ve weeded it probably the same amount of times.

Where the leeks were, I have direct sowed beetroots, parsnips and carrots. I hand watered the whole area a few times, and hand weeded too.  The beetroot are doing ok, slightly patchy germination. There’s no sign of the parsnips yet. The carrots are patchy, but there, which is exciting for me as I’ve not grown carrots on this scale before. The row next to the garlic under the plastic has been decimated by slugs in all this wet weather. I am going to try and transplant some of the carrots that need thinning into that bed.

An early sowing of rocket came to success at the beginning of the month. All 133m of it survived the snow of May under the fleece. And Organic North bought 35kg, and Unicorn 3kg, and I sold another 15kg at Levy Market and in the veg boxes. It is the best seller definitely this year to date.  But I had to spend a few hours hoeing it, and a few watering it by hand. Also, the last harvest for Organic North had to be done on Saturday night after Levy Market as the temperatures were reaching 25 degrees in the daytime. It had started to bolt and harvesting took hours to select the good leaves. It was too dark to see by the end,  and I’m grateful to George for his help.

The other 133m of this brassica bed was sown with phacelia. I thought it may have gotten killed off in the snow, so was pleased that I hadn’t wasted £20 on organic seed, when I saw the furry little stems reaching up. The whole 260m of it is supposed to be being kale. But so far I’m struggling to get the herb bed full of kale.

In the centre of the garden is a section where the old polytunnel was. It was ploughed, mucked and covered with plastic.  I have planted out 38 of my own courgettes,  and only 3 remain.  I ordered 100 plugs at a cost of £42 to replace them, and have about 10 left. The slugs have feasted in the three weeks of constant and at times torrential rain. It is disappointing 😦 A friend gave me 22 of his to replace and I am nurturing them on in pots and hardening off in dry weather, so fingers crossed for some yield. But definitely disappointing. I think I have learnt that commercial organic growers just need to be the kind of people that suffer a setback, and just carry on hoping that it’ll be better next time.

There are two 20m x 9m beds that we covered in plastic at the start of the season. I planted 1000 leeks in plug trays, and lost almost all to slugs while hardening off. I re – sowed another 1000 leeks, and promptly lost them again during hardening off to slugs and torrential rain.  I am nurturing the remaining 100, and pondering what else to do with the beds. In the middle of these beds is a 20m x 9m section that I direct sowed with rainbow chard and beetroot last week. I sowed it really thickly, mainly because the smaller disk for the sower didn’t seem to be putting any seed out, probably because the earth was sodden amd jamming it. Any that germinate too thickly I intend to put where the garlic is.

I sowed 80m of French beans on the other side of the polytunnel.  It was sodden, so myself and Duncan had to mark out beds, so as not to walk in them. Then stop every couple of metres as the seeder was getting clogged up with mud. I re – sowed a second time in some spaces, but they are looking good at the moment. It took hours to put up the netting. I’d like to get another 80m planted, but it’s too wet to rotavate where last year’s kale was.

The polytunnel has 30 cherry tomato plants in, 15 black cherry and 15 gardener’s delight.  I bought them in, as I don’t have anywhere to germinate them under heat. I also have about 100 marketmore cucumbers, in about 5 sowings. Also, basil, coriander and chives finally went in last week.

Then it’s mange tout, which is another disaster really. I’ve sowed twice and had only a few plants over about 100m.  Then George took over managing pea germination and has been soaking the peas beforehand to get them shooting their roots. This was going well, and we had hundreds sprouting,  but I added extra water and we were greeted by a smell on entering the polytunnel one morning. It smelt like fox scat left in a hot plastic airless bubble but was actually fetid peas in the polytunnel.  George bravely swilled them and chucked them wholesale in a bed, we’ll see if any come up. He took the rest of the seeds home to germinate in the garage where he could keep an eye on them. Hopefully we’ll still get a pea crop this year.

To end on a high note, the lettuces have been great. I have four 15m lettuce beds, which is proving manageable. Especially as it is next to the water tank. As in previous years I have had hundreds and can’t keep on top if it. I’ve got lots of Marvel of Four Seasons and a few green Batavia,  and with calendula flowers it’s making a good mixed leaf salad. The slugs have knocked a good bit of value off it though as I am having to discard many outer leaves.

Anyway, this Spring update was brought to you by a poorly Lindsay in bed watching Glastonbury.  May the next few weeks be a little drier.

Wow, this May has been cool and damp. And the garden reflects this, as have my spirits at times. Everything is behind, much hasn’t germinated, and flowers are battered. I am also injured, I put my back out digging couch grass in the herb garden, and it made me realise how much lifting and bending I do. I have been prescribed codeine and ‘light duties’ for a week or two and I should be fine. Fingers crossed.

Growing
The polytunnel looks totally different this month, with the tomatoes planted out, and the gaps filled with green batavia lettuces. In the end I bought 25 tomato plants from Glebelands, as
mine were so far behind with the cold weather.

I have treated the aphids twice with soft soap, and had to use a Soil Association approved supplier, which £17 for 1ltr! The ladybird larvae are chomping them too.

The 114m of beetroot are finally germinating and growing, though very slowly. It is being nibbled too, possibly by rabbits.
The 77m of mange tout are yet to germinate, which is very concerning, but I’m hoping its just because we haven’t had high enough temperatures. The 57m of lettuce has been lost, as it was under fleece to protect from very low night time temperatures, and created a haven for slugs. I re-sowed 19m and left the fleece off.
I don’t think all 3800 leeks have germinated, but lots have, and any gaps I will probably fill with onion sets.
I put out my 100 purple sprouting broccoli to harden off, and a bird must’ve gotten in and ate the lot. I re-sowed 40. The Westphalian kales are hardening off under a more robust system (hopefully!).
I have also sowed 18 dunja courgettes, 10 passandra cucumbers, 68 marketmore cucumbers, 100 buttercup squash, and 15 uchuri kuri squash. And the mice have been nibbling and moving seeds around, so I am replanting and re-locating ones I find in other parts of the polytunnel.

Selling
I’ve increased the veg box customers, and even did 14 one week, though 11 is about the average. Levenshulme Farmer’s Market every Saturday is going well. I have been selling my cut herbs, though the cold weather meant there was a three week gap in supply of salad as the polytunnel leaves finished and the mizuna under the enviromesh wasn’t ready.

I have sold potted herbs and strawberries, which have gone really well. I am trialing the Strawberry plants in Unicorn Grocery this week, and they are taking my cut fennel, oregano and sage too.

Musings
I went to visit Alan from Growing with Grace on the Fylde coast, which is an organic market garden. They run a box scheme, farm shop and sell some wholesale crops. It was a really useful experience, and Alan certainly crammed alot of talking into the afternoon! They grow on 3 acres. He buys from all the other great organic growers on the Fylde,  and they co-ordinate on crop planning etc. His polytunnel was humbling, it was so productive, his peas as tall as me, and a carpet of Little Gem lettuces.
I found it a useful pep talk in what can feel like an unrewarding environment, financially and otherwise. He reckoned I was doing the right thing, building up my own customers,and in some ways swimming against the prevailing tide 🙂